The owner sold a Muscle Hill colt for $320,000 and then bought a Muscle Hill filly for $320,000 during the opening session of the Standardbred Horse Sales Company’s yearling sale Monday that posted an average of $75,305, down 4.3 per cent from the strong 2016 opening day.

John Floren pulled off a unique double Monday at the opening session of the 79th Standardbred Horse Sales Company’s yearling sale at the Pennsylvania Farm Show Complex in Harrisburg, PA when he sold one yearling for $320,000 and bought another for the same price. The two Muscle Hill offspring ended up sharing the title as session toppers through the first of three yearling sessions that continue today and Wednesday.

Floren, who lives in Ontario and operates Coyote Wynd Stables, sold hip 112, a colt out of Sheer Glide named Sheer Muscle to Mario Mazza of New Hope, PA consigned by Peninsula Farms. Exactly 50 hip numbers later, Floren purchased hip 162, a filly named The Ice Dutchess out of The Ice Queen bred by David Reid and Stephen Dey III and sold out of the Preferred Equine consignment.

“How often does that happen? Just a little trade,” said Floren’s Ontario-based trainer Clark Beelby, who signed the ticket and did the talking for the veteran owner who does not court the spotlight. 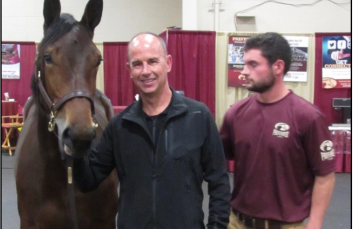