The Ice Dutchess freezes out foes in Jim Doherty

The Ice Dutchess won Saturday’s$357,450 JamesDoherty Memorial for 2-year-old filly trotters,besting Beautiful Sin by a neck in 1:53.4 at the Meadowlands.

Hanna Dreamgirl was third by three-quarters of a length.

The Ice Dutchess and Beautiful Sin both are from the stable of trainer Jimmy Takter, who has won the Doherty Memorial three years in a row and six of the last nine editions.

Johnny Takter ,Jimmy’s brother, drove The Ice Dutchess and put the filly in front on the backstretch after Hanovers Best left quickly from post nine and set the tempo of :28 to the
first quarter.The Ice Dutchess yielded the lead to Beautiful Sin at the half, reached in :56.4,and followed the leader through three-quarters in 1:25.4.

After turning for home, Johnny Takter and The Ice Dutchess found room inside and trotted to her second win in three starts. Her loss was by a nose in last week’s Doherty eliminations.

The Ice Dutchess is a daughter of Muscle Hill out of The Ice Queen and a full sister to stakes-winner Ice Attraction.

The Ice Dutchess was bred by Stephen Dey III of New Jersey and David Reid of New York and sold for $320,000 at last fall’s Standardbred Horse Sale to John Floren’s Coyote Wynd Farms. She pushed her earnings to $189,790. 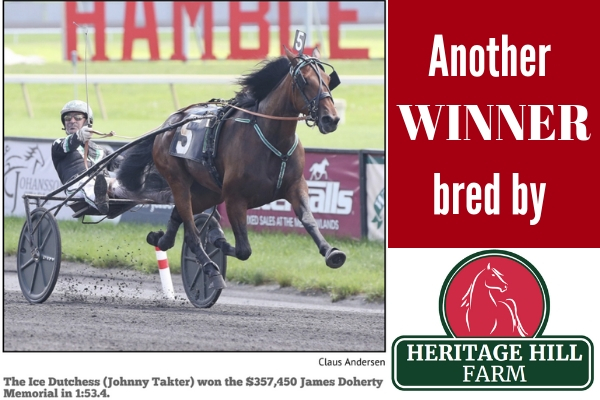